El Progreso What happens when you put together 16 brilliant choral conductors plus the 24 choral singers of Evoke? Heaps of glorious music-making of Martin, Poulenc, Byrd, Vaughan-Williams and more – of course! 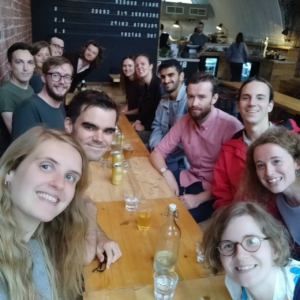 Travelling to Worcester to be the choir for the Voces Academy summer residential has become a highlight of Evoke’s calendar. This year was Voces Academy’s biggest ever intake, as well as its most ambitious programme. Poulenc fans will know that his Quatre motets pour un temps de pénitence, with their complex harmonies and high, exposed melodies, are not for the faint-hearted. Meanwhile Frank Martin’s Mass for Double Choir is a gargantuan, gorgeous piece demanding great stamina from both conductors and singers.

foursquare Our conductors rose to the challenge of conducting this complicated music. Each conductor brought their own interpretation to the table which made the masterclasses fascinating, varied and highly creative. We singers were also able to learn a huge amount about what it is that we respond to from a conductor – much of which is subconscious and to do with how a conductor embodies the music, not just how they ‘wave their hands’.

The programme culminated in an open concert in Worcester’s stunning Cathedral, with an enthusiastic audience that included members of the public who were visiting the Cathedral without realising that by doing so they would hear such amazing music!

We are also privileged that Ian Venables, whose Requiem we premiered in July in London, joined us for the concert. Worcester is Ian’s hometown so we included a rendition of his beautiful Pie Jesu from this work in his honour – a very special and moving moment.

Of course it wasn’t just about the singing! We can safely say that Worcester has a variety of fantastic pubs, cafés and burger joints too and we would thoroughly recommend it for a weekend visit. Elgar fans will be pleased to know, too, that his Cockaigne Overture adorns the walls of the toilets in Zizzis. Surely this must be the greatest symbol of love and affection from the hometown of one of the greatest British composers.

We look forward returning to Worcester again next year – and keeping in touch with the wonderful Voces Academy conductors in the meantime. Watch this space – they may well be coming to a choir near you soon!